Palolem Beach, the Sea Eagles and a Bonfire 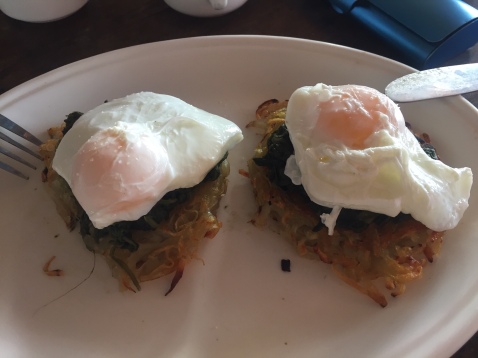 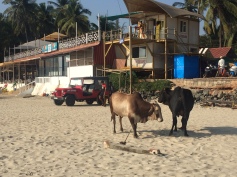 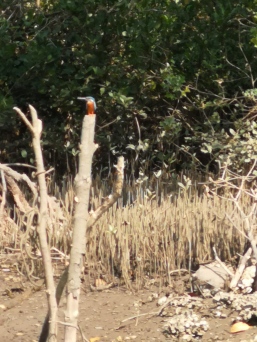 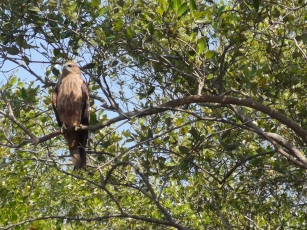 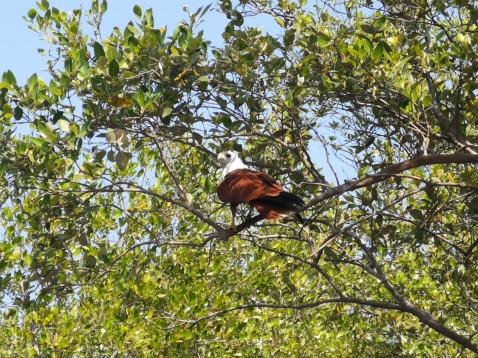 We spent today at the beach north of Patnem, the famous Palolem Beach.  It’s a long, curving bay backed by luxuriant palm plantations with rivers and headlands at either end.  Nestled the full length of the bay these days are shack cottage resorts.

We like to base ourselves at the extreme north end of the beach at a shack called Cozy Nook.  It is a typically ramshackle bamboo cottage resort which I would describe as being “post Caribbean hurricane chic” in design and décor.  We really do like it there.  The sea is always extremely calm and there is a 6 inch deep lagoon between the restaurant and the main part of the sea for much of the day depending on tide.  This water reaches bath temperature very quickly and becomes a magnet for small children.

We got there in time for breakfast which is a highlight.  Some of our group walked, setting off at 8am… and some of us tuk’d. setting off at 830.  By great luck we arrived within 2 minutes of each other and secured the front row of beach beds, then decamped into the shack to eat.  I had a Spanish omelette with cheese and a cafetiere of coffee.  Bob had his favourite poached eggs with rosti.  We all felt as if we’d feasted, the portions are generous.

Much sunbathing and swimming then followed.  Stuart went out, and tried paddle boarding acround the bay.  Seemed to go well.  After lunch, 6 of us, including Mick and Christine, went up river in Subash’s punted boat to see the birdlife of the mangroves.  He had of course brought a bucket of chicken for the kites and sea eagles.  It’s a magnificent sight to see these huge birds come swooping down to pick up the pieces of meat, either in their beaks or their claws.  Awe inspiring really.  Mick and Christine weren’t expecting it and enjoyed it very much.  We also saw kingfishers, skippers, cormorants and herons.  The best £2 ever spent for an hour’s tour.

We got back to Patnem late afternoon and then met up again at 630 for pre dinner drinks.  Gloria arrived today from Kerala and joined us.  We had a good catch up.  Then walked down the beach and ate at RoundCube where they had a firepit going.  They arranged tables for us around the fire.  We had a good dinner, washed down by happy hour gimlets and watched the flames and later a fire dancer.  Such a nice night.

At Home Keeping Inside