Visiting a Spice Farm in the Western Ghats 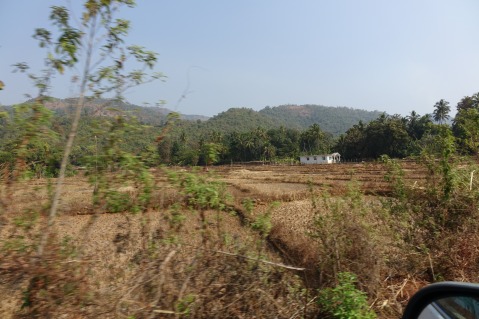 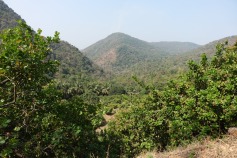 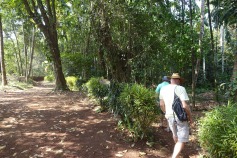 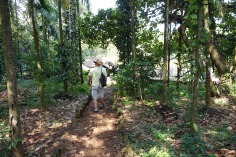 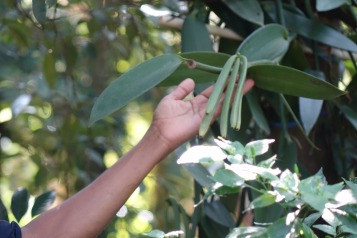 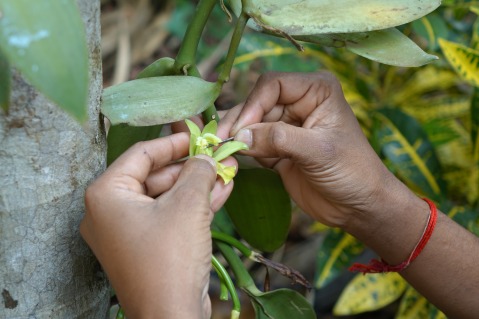 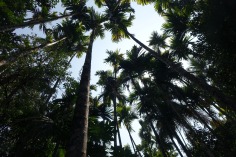 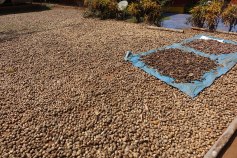 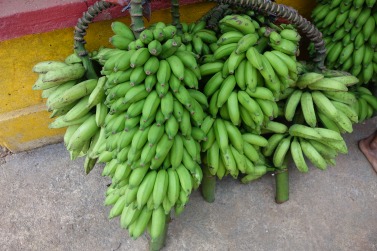 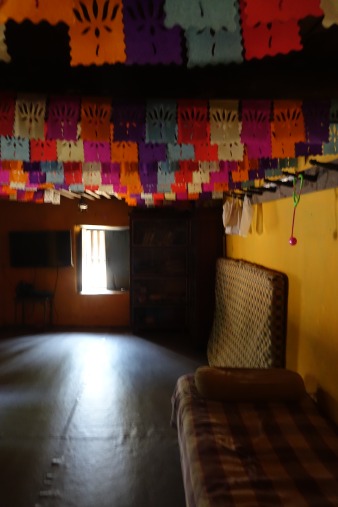 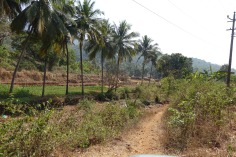 Today Bob and I and John and Susan had a wonderful excursion to an organic spice farm in the Western Ghats (hills).

We set off just after breakfast which we took at Eve’s.  Christopher picked us up in his taxi which is very comfortable as it has 3 rows of seats.  He drove very carefully and we very much enjoyed the 50 minute drive up into the hills.  In fact it was a highlight of the trip just as much as visiting the spice farm.  The road is mainly through a forest/nature preserve and is very narrow and twisting.  It winds through dense forests of many different trees – mango, cashew, palm as well as deciduous oaks and possibly chestnut.  From time to time the road would come to a viewpoint over the valleys and the peaks ahead, as we steadily climbed.  Along the way we saw small fields of farms: rice fields waiting for the monsoon rains, onions, beans, mustard plants.  All very picturesque.

After about 50 minutes we arrived at our destination: Tanshikar Spice Farm link

The farm has been owned by the same family for 3 generations and they have won prizes from the government for their farm and produce.  The farm is a densely planted plantation where multiple crops exist together both as a failsafe against one particular failure in any year and also as complementary crops.  We were welcomed by the owner with a drink of lemongrass tea and a bowl of cashew nuts.  All the food items offered are grown on the farm, completely organically.

He then took us on a fantastic tour of the farm.  He was an excellent guide and most impressive in his knowledge and his perfect English.  He explained each of the crops grown in interesting detail and often gave us some to try.  One highlight was when he climbed a terrifically high betel tree using only a coconut rope loop which was placed around the feet as both a climbing aid and a sort of brake.  He went so high and then from tree to tree without coming down, making the trees bend like poles.  One of the group was then invited to try and he managed quite well although he burned his ankles on the descent.

Amongst the crops we saw in the beautiful plantation were: vanilla, bananas, cardamom, peppers, nutmeg, mace, betel; lemongrass, turmeric, coffee, chillies, cashews, coconuts, cocoa beans, cinnamon, papaya, mangos.  He explained the health benefits as well as the culinary uses of each crop and he also explained how some of them were remarkably toxic if taken in excess i.e. mace.  Fascinating stuff.

We then saw the spices drying in the sun.  He took us inside the farmhouse which is 250 years old and once housed over 30 people including his parents and five uncles and their families.  It is built of mud including the floors and he explained how this ancient building process ensured coolness and other benefits.  The walls had to be a particular thickness in order that heat was extracted out to keep the inside cool.  The floor was hardened mud although it looked and felt just like stone.  The benefits of a mud floor were that it allowed you to remain “grounded” to the earth, it had “give” which was better for your joints and bones and also that items dropped would not break.  The design of the house was around a central garden courtyard with a colonnade and rooms leading off each side.  The courtyard was open to the sky.  In the centre they planted a basil tree which “cleaned” the air, added oxygen and was beneficial to the ladies who cooked.  It was remarkably similar to Roman houses seen in Pompeii and other parts of Italy.

FInally we saw their bee keeping area where honey bees were kept in their hives.  He explained that process too and showed us the bees in their combs.

Finally, our tour ended with a lovely lunch, everything from the farm.  Dal, rice, roti, vegetable curry, blackeye pea curry, pickle, mustard cabbage, pakoda, bananas.  It was a good spread and all delicious.

We got back to the hotel about 3 and had a good rest in the cool.

Tonight, was music night at Eve’s and Kevin Brown plus two other excellent musicians played.  A mix of blues, folk and a little bit of bluegrass and steel guitar.  They were really excellent.  So very much better than the previous musician who was very one dimensional and limited.  There was an enormous crowd in who all seemed to be enjoying it hugely.  Hope they play again.

Winter in Goa – My Next Trip