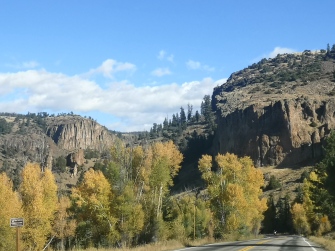 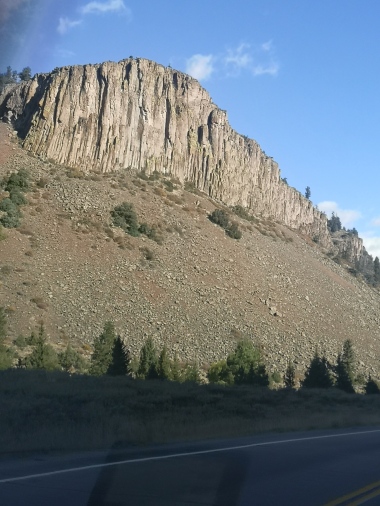 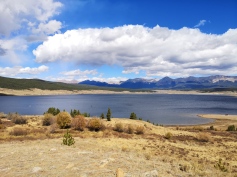 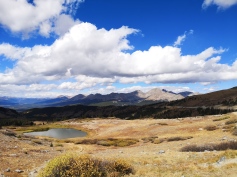 One reason we didn’t want to take the major road route is that it largely mirrored our route from Leadville to Montrose, when we were travelling south.

We headed out of Lake City just after 9am.  Headed north on 149, still the Silver Thread Byway.  What a beautiful road this is.  I am so glad we didn’t take the forest road route that would have eliminated this road from Lake City to Gunnison.    A lot of the route followed the south fork of the Gunnison, the road clearly built in the canyon that the river used to occupy back in the day when it was at its full roar, before it was dammed.  Massive rock walls on either side, great sandstone and limestone cliffs and strange fingers.  Then the canyon gave way to great golden hills and gentle valleys.  Just a small ranch or two dotted along the way.  The gold was from the cut grass and hay, not aspen this time – not once we left the canyons.

Then ahead, a great gateway of mountains…. we passed through and turned NE towards Gunnison.  A small bit of repetition as we travelled as few miles on US 50 and then at Gunnison we turned north on CO 135.  We stopped fairly quickly for a coffee and a muffin.  Thank god we shared the muffin.  It was apple spice and roughly the size of a small planet.  I’m not joking.  If it was a plant pot, you could have grown a tree in it.

On we went and then turned east alongside the Taylor River, as it sped its way south to the Gunnison.  Lots of fishermen fly-fishing as we went along.  The road was excellent, tarmac all the way but very little traffic.  A total pleasure to cruise along at about 37 mph, just relaxing, taking it all in.  We climbed steadily till we reached the Taylor Park Reservoir.  Stupendous views to the west of the Sawtooth Mountains…. just beautiful.

After the reservoir we turned east again on CO 209 which took us over the extraordinary CottonWood Pass.  We crossed the Continental Divide – probably the last time – at about 12,300 feet above sea level.  Lots of hairpins running up to the pass, and down from it, but not frightening.  The road was too good.  Newly resurfaced we think.  And so little traffic.  We just cruised along.  The view from the Pass, at the Divide was stunning in each direction.  Enormous mountains stretching away…….

We continued east from the pass, down through the forests, along creeks and small lakes till we reached Buena Vista.  Honestly, if you are going to Gunnison from Buena Vista, take this road rather than go south and then west on US50  It’s absolutely amazing.

We headed briefly south and then north east on CO24 from Buena Vista.  It seemed busy after our morning crossing the mountains.  At Fairplay we branched north west on CO 9 to Breckenridge.  This involved crossing another pass – the Hoosier – which was about 11,000.

Got to our resort, Grand Timber Resort, in the ski village at about 330.  A good welcome and our condo was ready.  Wow.  Really nice.  2 big king size bedrooms, each with bathrooms, plus a loung with a full kitchen, big terrace….  the second bedroom even has a kitchenette.  It’s like a separate studio condo.  We unpacked properly and then went out to the City Market supermarket to stock up on food and drink.  Ricky and Carol arrive tomorrow for the weekend and we want to make them a proper English roast dinner with – of course – Yorkshire Pudding.  Got everything we needed plus more and headed back.  We registered for a City Market Loyalty card which was entirely painless and got us an extra $16 off.

Ate dinner in, and just relaxed.  Put a wash on – we have a washer and a dryer in the unit which is great.  It’s going to be a good week here.  Breckenridge is a full on winter ski resort at 9.600 feet.  We can see all the slopes stretching up from where we are.  There are A LOT.  I don’t think I’ve ever seen so many slopes.  Well… I suppose I haven’t been to that many ski resorts… but some…..   And we’ve already seen the main lift ie the gondola.  There are lots of other lifts of course.  It must be phenomenal in the winter, it’s impressive as a summer resort.  Will look forward to exploring in the week.

A Road Trip Thru Jordan